CAN YOU REALLY TEACH AN OLD DOG NEW TRICKS?

THE EVOLUTION OF DOG TRAINING

Dog training was no doubt first taught when the cavemen took wolf cubs into their caves. Initially to serve as companions, and as guard dogs. There is evidence of early cave drawings showing how important animals were to our earliest human ancestors.
For centuries dogs have been trained by humans for a variety of reasons. The Romans trained their pups for herding. In the 1700 and 1800's the dog world in the UK showed sporting breeds that were trained to walk round the ring. Training dog to win obedience competitions didn’t really come about until the 1930’s in America. 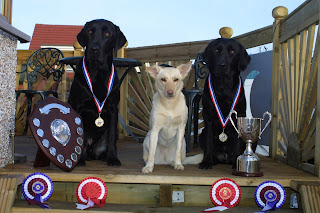 A lady called Helen Whitehouse Walker, who bred Standard Poodles, decided to show the dog world that her dog was more than just a pretty face.
The dog training club was born, at least in the US. Dogs were trained for war, they were trained to be actors. Remember Rin Tin Tin? And who could forget Lassie? Many of the early trainers came form military or Police backgrounds. The methods used by these early trainers would probably be regarded as heavy handed by todays standard. One man in particular could be credited for having a major influence in dog training methods in the US.
William Koehler was a renowned trainer for consistently winning team obedience training competitions. By 1960, 40'000 dogs had been trained through Koehler’s school. Koehler was also lead animal trainer for Walt Disney. His method of training is largely based on the principle of negative reinforcement and punishment. Negative reinforcement is were a dog does what you want, to avoid an unpleasant experience. Probably the most frequently used example of negative reinforcement in dog training is the use of a choke chain. Once a dog has experienced the jerk on the chain around its neck, most dogs will work hard to avoid it happening again. Koehler used a choke chain to teach dogs to walk to heel, spinning around and going in the opposite direction when a dog went out in front. Blanche Saunders, a friend of Helen Whitehouse Walker was another user of negative punishment as a training tool. Saunders used to teach her students the ‘Heel, Jerk, Praise’ method. Believing that once physical punishment had been delivered, lavish praise should be given for the corrected behaviour. Basically, once you jerked on the chain and the dog spun to your heel you told him what a good boy he was. Food training was almost unheard of in those days. New skills were taught using physical prompts. The lie down was taught by standing on a shortened leash. The sit was taught by ‘shoving’ the dogs bum down into position. Jumping up could be cured by kneeing the dog in the chest. It wasn’t until the 1940’s that a more positive training approach was used to teach dogs obedience. Winifred Strickland, known as the first super trainer introduced a more humane kinder method of teaching her dogs obedience. However she still never advocated the use of food as a reward claiming that giving your dog food was encouraging the dogs to think more of their stomachs than their owners. It wasn’t until the science of dog learning, dog behaviour, merged with Dog training that dog training really took off. Knowing how a dog learns and what motivates a dog is now seen as the most effective method of teaching your dog, encouraging the right behaviours and discouraging the unwanted behaviours. Dog owners are becoming more knowledgable and are demanding to know more about how their dog thinks, and works. Todays trainer needs to be armed with the right tools in order to meet this demand. Canine Psychology is now an important part of learning dog training and as trainers we should all embrace this science. It can only make us better trainers and our dogs more socially acceptable.