We look at celebrities in the media and we think “What Diva’s”. Spoilt rotten. But I bet they didnt start out like that when they were kids. As children they most likely were quite normal. Going to school, playing out in the yard, nice manners, ‘normal’. But they get a bit of fame and before you know it they become demanding, self centred, obnoxious and down right rude. Over the decades I think we have done the exact same thing to dogs. They have become pampered, demanding and yes down right rude in their behaviour. Some to the extreme extent where they bite. But how has this come about? If you ask a lot of owners of dogs today they will tell you their dog understands what they are saying to them. We treat them as our best friends, and sometimes take it personally when they ignore us or quite literally “bite the hands that feeds them”. Most people now live in nice warm houses with central heating. Furniture is less expensive than what it was several decades ago. In the past homes were heated by a single fire in the main living room, usually coal. Furniture like a sofa cost the best part of two months wages. Dogs were most definitely not allowed up on them. Who would want a smelly wet dog up on their nice new sofa? Today we tend to confuse our dogs, one day we invite them up onto the sofa with us and the next scream at them for being stupid enough to go up on the sofa after having just come in from the rain.

When I was young my mum would take me and my brother up to our nan’s every morning. This was roughly a half hour walk. As we left our house mum would open the door and let our quite large dog out to make its own way there. As we entered our nan’s street 30 minutes later sure enough our dog would be coming down the street form the opposite end. I have no idea where he had been or what route he took to get there. Sometimes he would come in to the house at that point but most times he would stay out until it was time for us to head home again.
Nowadays with the changes in attitude and the advent in the changes in the laws, dogs are not allowed to roam the streets, which by and large is a good thing, however now fido sits in the house for most of the day. Before we had a nice tired out dog who had spent all day out running around, now we have a dog that sits around all day positively bored and looking for something to do hence the reason many get up to mischief. Our family life has changed somewhat as well, before we would wait till the we had children and they were grown up a bit before we thought about getting a dog. Now a lot of families are leaving having children to later in life whilst they pursue careers, but decide to get a dog as a kind of surrogate child. And treat them accordingly. We expect them to come as puppies completely conversant in human speak and if they dont respond when we give a command then we scream it a little louder, ‘because that always works’. Its a bit like when we go on a foreign holiday with total arrogance that where ever we go the local people will completely understand english, and if they don’t we will say it louder. “THE WAY TO THE BEACH”. And get really upset when they shrug their shoulders and walk off. Sound familiar? It happened to me in Paris.
Is it any wonder when we do the same to our dogs. “Come......I said COME”. then we get really upset when they walk off and ignore us. Dogs are the most selfish animals on the planet, and will only do something if theres something in it for them. Your job as owner is to find out what that something is at that moment and use it to get the dog to do what you want it to do. Shouting at it is not one of those things.
We have to be leaders and be dominant (nasty word). But that does not mean punitive measures. I mean we have to set rules and boundaries and let the dogs know when they cross those boundaries. If we don’t then as I said above they will assume they can do what they like. Sit and beg for food, go up on the sofa when they like, don’t come when we call. We discipline our children when they cross those boundaries by grounding them, or taking away some privilege. Dogs are no different, withdrawing resources like toys, treats, affection or social contact are all very potent weapons in disciplining your dog and used sparingly can be extremely effective. But this is only when things go wrong. By far the best way to deal with situations like these are to prevent them from happening. By engaging with them, giving them a role and a purpose in the pack and ensuring they are not isolated from social contact with their pack for extended periods of time will ensure we have a happy content tired out dog. If we start understanding our dogs better and go back to treating them like dogs and not little children we can get back to having the kind of relationship we used to have with them and maybe some of these horror stories reported in the media can be reduced. Lets give it a go.
Posted by Tahamasadog at 03:52 No comments:

NEW DOG LAWS WILL AFFECT YOU.

MAKE SURE YOU UNDERSTAND WHAT IT MEANS FOR YOU.

The following extract has been taken from The Dog Business Academy web site.
I received this information in an email to me.
I think it is of interest to everyone involved in some way with dogs and so I am sharing it with you. In Scotland we have slightly different laws including dog Control Notices. But if you are visiting England, as a lot of us do as we travel to various meetings and events with our dogs, then this will apply to you.
The UK government has announced plans for tougher dog laws after recent high profile dog attacks.
These laws will affect you whether you own a dog, working with dogs or have dogs in your care.  It will certainly guide your focus for dog training, either your own or others.
Ministers are looking to extend the scope of the law to enable a prosecution to be brought against anyone whose dog injures someone or acts aggressively in a private place, as well as a public place.  Such as a home where they are permitted to be.

New UK Dog Law 2014
With the new sentencing guidelines in 2012 it was expected that more offenders would face jail sentences, more will get community orders, however, the UK government are getting tougher.
They have now announced plans to increase the sentence for owners of dogs who are involved in fatal attacks to a maximum of 14 years in prison and owners whose dog causes injury or kills a guide dog can expect to face up to 3 years in jail.

Any injury caused by your dog to another person may result in a criminal charge of aggravated injury. NOTE: This can even be a small bit or puncture wound, a scratch or a bruise even if it is from a fall.
This will result in a criminal record, a large fine and possibly a prison sentence and will impact your career if your job relies on you having a clean criminal record.
Note:  Dog to dog injuries will normally first be dealt with in the Magistrates Court or as a civil case or in the small claims court. Does not normally result in a criminal record or prison
Your garden and car (when not parked in your garage) will now be classed as public access space.  Even a trespasser in these areas will be protected by the new laws.  The only people who will not be protected by these laws is a trespasser in your home.  Not clear what constitutes a home, only by courts making decisions will this be clarified.
A person in your home legitimately is protected by the new laws and can lead to a criminal charge if injured by your dog.
The law says all dogs must have a collar with identification on it which includes your name and address, even if it is tattooed or microchipped.   It is also advisable to have your telephone number, preferably a mobile number.
In 2016 you will also be required by law to have your dog microchipped.
Posted by Tahamasadog at 09:04 No comments: 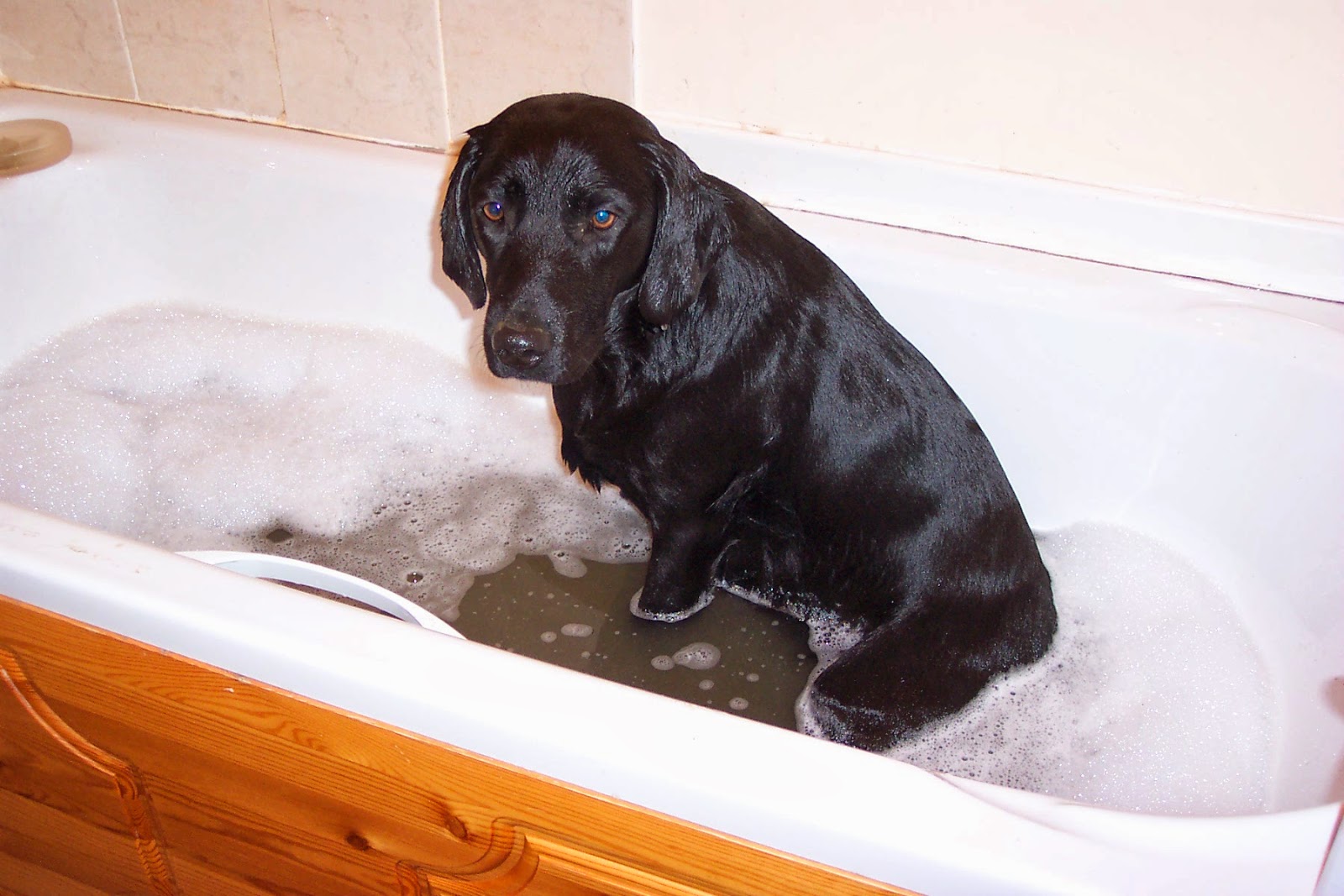 Choke chains damage dogs, cause pain and can cause behavioural problems. Choke chains have been directly linked to to the following;

If you don’t use a choke chain to stop the pulling then what should you use?

You could use a flat collar, harness or head collar. There are many different types in the market and it is important that you choose the right one for your type of dog. You could also train your dog not to pull. By finding a qualified trainer in your area you could attend classes and learn how to train your dog positively without aversive methods how to teach your dog to walk without pulling.

There have been many studies onto the effects of correcting your dog using choke chains.

“In a retrospective study on spinal pain, injury or changes in dogs conducted in Sweden, Hallgreen (1992) found that 91% of dogs with cervical anomalies experienced harsh jerks on lead or had a long history of pulling on the lead. Use of chokers were also over expressed in this group. This strongly suggests that such corrections are potentially injurious”.

In 30 years of practise Including 22 years as a veterinary advisor to a police dog section) I have seen numerous severely strained necks, cases of fainting, transient foreleg paresis and hind leg ataxia after robust use of the choke chain.

When the practise of slamming the dog sideways with a jerk that brought the foreparts clear of the ground and two or three feet towards the handler, became popular in the 1970’s the resulting painful condition was known as Woodhouse neck in this practise. Some of these cases exhibited misalignment of cervical vertebrae on radiographs. It is suggested that an existing spondylopathy renders these dogs more vulnerable to injury. Robin Walker BVetMed MRCVS.

Two authoritative references which should put you in no doubt that you should never use a choke chain or slip lead for correcting a dog that pulls on the lead. You should seriously consider any advice given to you to put a check chain on your dog as a means to correct lead pulling.

Posted by Tahamasadog at 04:00 No comments: