Here is a handy leaflet from the RSPCA on what you should do on Fireworks night. It is estimated that some 45% of dogs get anxious when fireworks are let off. If your pet is really frightened then you should seek veterinary advice.

Posted by Tahamasadog at 02:33 No comments: 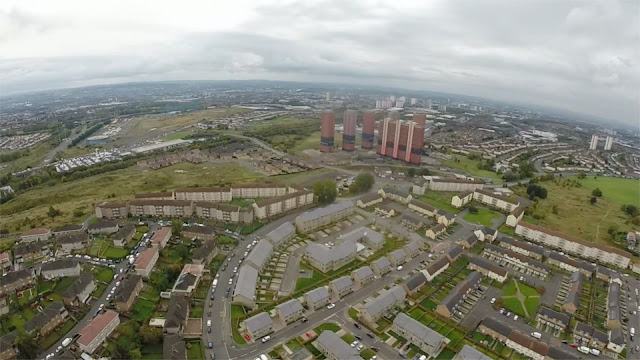 Hi, These are the famous Glasgow Red Road Flats. They began construction in 1964 and were completed in 1969. They were officially opened in 1971.
Today at approximately 15:18 they were demolished with explosives as part of a regeneration of the area. These flats were an iconic part of the Glasgow landscape and quite famous. So it was of no surprise to me that on the day they were brought down a sizeable crowd had gathered to watch this significant event. Significant to not only the many Glaswegians who live here but the other visitors and people who had once lived in these flats. Many foreign visitors to our city stayed in these flats for a time.

History lesson over now for my rant.
As a keen amateur  photographer I was excited at the prospect of capturing this historic Occassion.
I only found out the day before that this was actually happening today the 11th October. What I couldnt find out was what time it was happening. However through some contacts I learned that it was either 11:00 or 12:00 midday. So off I, and several hundred other people, set to find a suitable vantage point to witness this truly spectacular event. I made it to a place nearby by about 10:45. I set up my equipment and waited,.....and waited....and waited. 12 came and went and nothing. I learned again from another source that the detonation had been put back to some time after 14:00. So I packed up and went home. I live quite close to the area. I was a bit upset at the lack of communication at that point. Nothing to what I would feel later. Back home I busied myself charging batteries etc. At about 14:00 I left home and went back to my vantage point once again to capture this spectacular event. Once again I heard on the grapevine that blast off was 15:00. Not wanting to waste any batteries I delayed setting up until 14:55. Just in case there was a slight delay. I sent my drone up at 15:00 hoping I hadn't delayed too long and missed it. And I waited with breathless anticipation, and I waited.......and waited.  A drone battery lasts typically 20 minutes. At 15:16 I was getting nervous that I might run out of power and my drone would plummet from the sky. So I brought it back down to check it and replace the battery. I had also heard from another source that there would be a klaxon sounding to warn everybody about the loud noise. So I felt pretty confident.
Drone on the ground, battery in hand and then BANG. I looked up and there was the largest dust cloud I had ever seen. No warning, no klaxon, no count down, nothing just BANG and 3 seconds later, nothing but dust. Now ok I can take some of the blame here for not having enough battery life in my equipment but I have to ponder and think.
If we were in America right now. This event would have been handled so much differently.
First of all it would have been on all the media channels weeks before making a big build up for such an iconic set of buildings. On the day I am sure there would have been marching bands and majorettes marching down Royston road hours before the big bang. They would have had video screens the size of Hampden placed at strategic points around the area for spectators to feel part of the occassion. The Mayor, or in our case the Lord Provost, would have been invited along to give a speech about regeneration and to start the countdown, which via video screens we would all have joined in. My point is this, we suck here in Glasgow and Scotland at putting on a show for such things as these for the ordinary punter. The only time we seem to put on any kind of show is when we want to charge money for the privilege of taking part. We had an opportunity here to get the people of Glasgow right behind this event. After all its our city and our buildings. But instead we botched the whole thing up, we couldn't even get the time right and had hundreds of people lining up for a view for nearly four hours and the whole thing was over in 4 seconds. Quite frankly Glasgow City Council BLEW IT.
Posted by Tahamasadog at 09:09 No comments:

WE ARE WHAT WE EAT

In my work I am often asked to help people who have dogs with behaviour issues. Some of these ‘issues’ are no more than natural behaviours for dogs and its my job to interpret these behaviours and educate the owners as to why their dogs are displaying them. Most of the time the owners would prefer the dog not to do them. For example ‘jumping up’ whenever the dog greets someone. Its completely understandable why an owner would want their dog to stop jumping up on unsuspecting visitors to the home or people they meet in the street. Apart from the obvious annoyance to the people being set upon there can also be a danger if said mis behaving dog jumps up on someone who is easily knocked off balance like an elderly person or a child. So thats were I come in. However thats not what I want to talk about today. As well as these behaviours being natural to dogs, sometimes behaviours are caused by what we feed them.
The food we give our dogs provide the building blocks for muscle growth, healthy organs, bone structure and hormones. Food also provides component parts that are required to regulate the neurotransmitters. Neurotransmitters are chemicals released in the body that send messages back and forth through the brain. These neurotransmitters control mood, emotions and ultimately behaviour. Those effects we feel after a satisfying meal, our dogs feel as well. Think about how you feel after Christmas dinner. Well stuffed and ready to relax by the fire. Now think about the energy high’s you get when you have an energy drink or a large bar of chocolate. The sugar rush can be quite high. Dogs feel these short term affects just the same as humans. Furthermore our diets can have long term effects on our emotional outlook. There is ongoing research right now into what influences there might be from the dog food we feed our dogs on such things as anxiety, activity and even levels of aggression. Some of these lasting many weeks and months. So the next time you go to the pet store to get your next bag of food you might want to consider what it is your feeding him and wether or not it is contributing to some of his or her behaviour issues.

If you would like to read more on this there is an article written by Rebecca Ledger PhD. in her blog behaviour dept.


“An advanced guide to improving dog behaviour and welfare with dietary management.”
Posted by Tahamasadog at 02:52 No comments: